Thanks to its innovative design and the ground-breaking technology it applies, it is in many cases the only solution, while it can also be used as a complementary method, following surgery, conventional radiotherapy or chemotherapy. 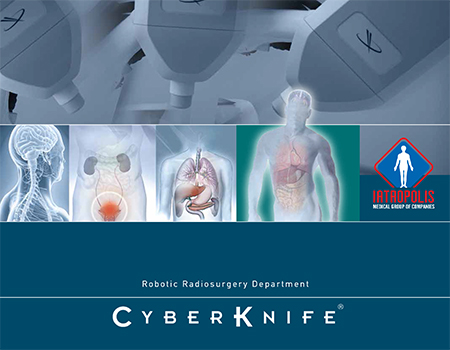 Cyberknife consists of 5 main parts, used in cooperation to perform medical Stereotactic Radiosurgery, these are:

In the liver, the pancreas & the lungs 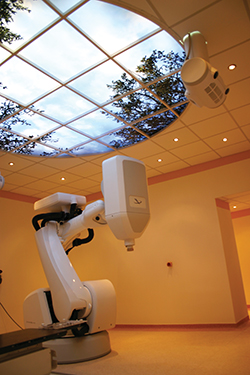 In the pancreas:
• Adenocarcinoma:
/ for local disease, as monotherapy or in combination
/ for disseminated disease - combined with chemo or radiotherapy)

CyberKnife can be used for the treatment of the above in the following ways:
Either as a first-line option

The CyberKnife detects the target, using a digital imaging system in real time, and monitors tumour movements, due either to patient movement during the examination or to the movement of the tumour due to the respiratory function. The synchrony technique is implemented to eliminate all these slight movements.

The decision as to whether and how the patient will be treated is taken after evaluation of his/her medical file by the CyberKnife scientific team (a radiotherapist-oncologist, a doctor specialising in the treated organ and a radiation physicist).

In the prostate
The application of CyberKnife robotic stereotactic radiosurgery in the prostate offers many advantages compared to other alternatives for the treatment of adenocarcinomas.
It is not invasive (unlike radical prostatectomy)
no anaesthesia is used, no recovery time is required, as there is no damage to normal tissues.

In low-risk patients, it is the most modern and safe non-invasive method. 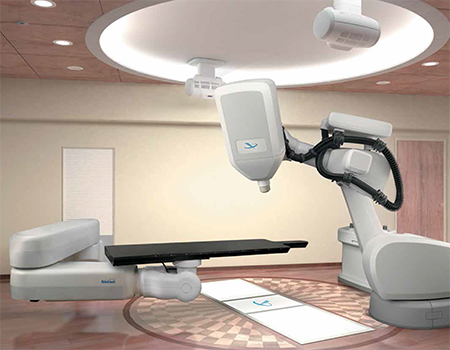